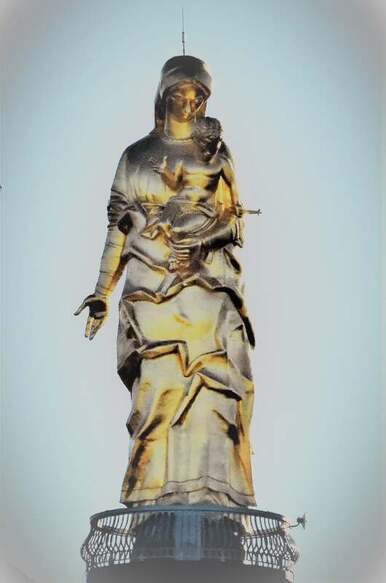 From the Neolithic times it has been an important center. During the Roman Era (Derthona) was a thriving colony where the crossroads of via Postumia, via Emilia, via Fulvia and via Vercellina met. Christianity had a strong hold here even in the second century A.C., the Patron Saint Marziano became a martyr in 122 A.C. under the reign of Emperor Adriano.
Tortona withstood the Germanic invasion unlike Voghera (Libarna & Iria) which were destroyed. In the middle ages Tortona (1122 A.C. – Terdona) became a free commune but in 1155 A.C Federico Barbarossa attacked the town, causing the people to take refuge on the Castle Hill which had a water supply. After two months of battle the town was destroyed. Rebuilt with help of the Ducato di Milano.  With the important position of Tortona its history is very rich ( Napoleone and Savoia), so it merits a stay in the zone for those who have an interest. As mentioned before its Christian roots are deep, and the town houses many churches, each with its treasures and history, they are worth a visit.
Tortona is also part of the “Via del Vino” with Barbera, Dolcetto, Cortese  and Timorasso; an ancient white wine which has now been brought back to its glory as it is only found in this area. Needless to say, where you find good wine there is also good food, Agnolotto Tortonese, Sugo Aià, Montebore Cheese, Baci di Dama and the sweet smelling small Strawberry of Tortona, just to name a few.
VIGUZZOLO 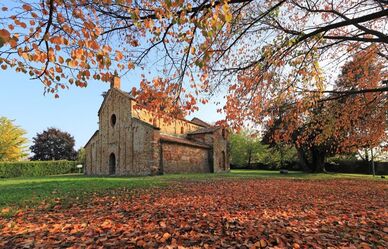 An agricultural village on the right side of the Grue stream (m 128 sl) reported in documents of 800 A.C. The Parish Church dell’Assunta, Monastery dell’Annunziata and a marvellous Romanesque Pieve built around the year 1000 A.C., all containing objects to be seen.
VOLPEDO 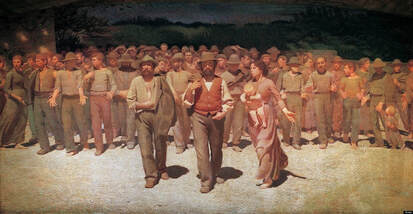 That in 2006 was named as one of the “Borghi più belli d’Italia” at m 182 sl is found on the right side of the Curone Stream and is famous for their peach tree plantations. More than likely it was founded by the ancient population of Liguri, Roman remains of the first century A.C show their presence. The Romanesque Pieve here was documented before the year 1000 A.C. at the same time as “castrum”, there have always been battles between Volpedo and the village Monleale on the other side of The Curone.
The painter Giuseppe Pellizza was born here in 1868, famous for his “Il Quarto Stato”, you are able to visit his house and studio. Around the village you will find reproduction of his most famous works
SITO ARCHEOLOGICO DI GUARDAMONTE 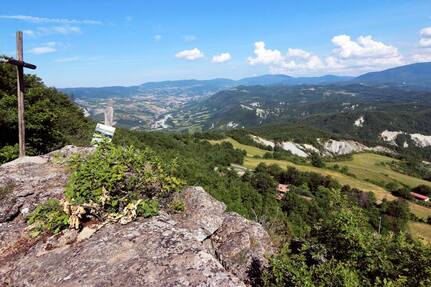 During the 3rd stage of the Old Sea Route, you pass by this site, it was habited for 5000 yrs from the Neolithic era  till the end of the Roman Empire. From the 1950’s a great interest has been shown and excavations done which have produce information on the lifestyle of the people living there and their commercial trade with other ancient people, even Etruschian Pottery has been found. With the expansion of the Roman Empire, the inland Liguri population occupied these areas which were fortified with the so called “Castelliere”. Geologically this area is very interesting and shell fossils are easily found.
FABBRICA CURONE 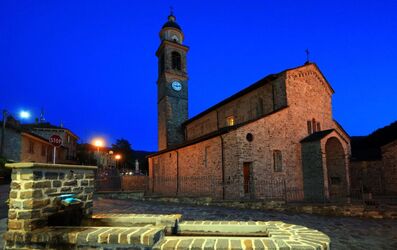 At m 472 sl in Val Curone ( the Town Hall is found in the hamlet Garadassi 712m), this area was populated by the Liguri people,as mentioned with Guardamonte.  This territory was first given to the Bishop of Tortona and then to the Marquis Malaspina until the end of the ‘Feudi Imperiali’ in 1797.
The Roman Pieve is the oldest and most important monument of the valley. On the first Sunday of October there is ‘The Festa della Montagna’ a tipical village fair with home products, old trades with their tools. Among the hamlets in the rural district, Caldirola, has a ski station built in the 1930’s which in summer is used for mountain bikes and in winter downhill skiing. A lovely zone for walks in all seasons.
TEMPIO DELLA FRATERNITA' A CELLA DI VARZI 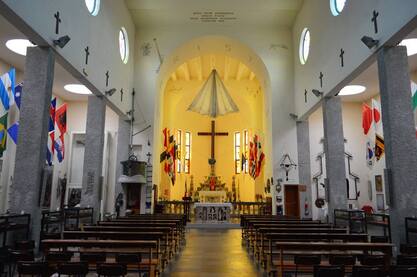 At Cella di Varzi there is the ‘Tempio delle Fraternita’ which has objects from most of the wars fought in the world during the 1900’s, well worth a visit.
BACK
Share