From Colle Caprile (GE) to San Fruttuoso (GE)
We leave Colle Caprile (m 481 sl) towards Uscio (m 335 sl); after about 1.5km we turn left taking the road to Colonia Arnaldi, which a is at present a Spa, established in 1906 by the chemist Carlo Arnaldi. We follow the trail marked with VM (two red circles), after 1km we take the trail to the left indicating Passo dei Casetti (m 549 sl) where we will find The Madonna del Ciappeu. 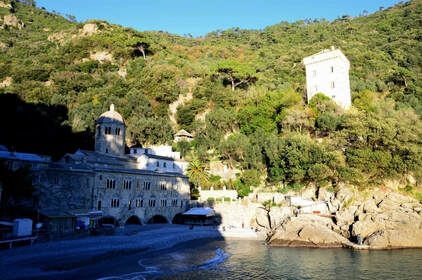 We continue to Monte Tugio (taking the ridge we do not go to the summit) and we reach Passo della Spinarola (m 542 sl). An information board of the Old Sea Route (Via del Mare) explains the route, partly downhill and flat, on the west edge of mounts Borgo and Bello takes us to Passo del Gallo (m 486 sl).  We shortly come to the Bivouac Caravaggio, to our right there is the deviation that goes down to Recco. We continue on a flat trail until we come to the stone steps which take us down to Ruta di Camogli (m 256 sl),  which has a balcony that gives us a beautiful view of Camogli. From the Church of San Michele Arcangelo we turn right onto the asphalted road among the buildings and we go uphill on the dirt road until Portofino Vetta and the radio antennas of Sella Gaixella (m 408 asl).
Now we walk along a dirt road until Pietre Strette (m 467 sl), we turn right and right after left, following the path downhill that becomes tortuous in some stretches. At the crossroad, we turn right and we pass the Molini refuge, then we continue along the path downhill until we reach San Fruttuoso Abbey.
Share