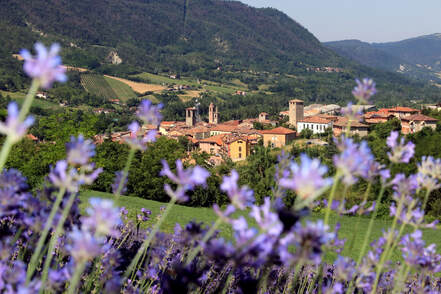 From the Piazza del Mercato of Varzi (m 416 sl), we go over the bridge of the Staffora stream and turn left on to the dirt road, continue southwards along the river bank for about 800m, at the cossroad turn left. The trail is well marked with arrows coloured red-white-red. The dirt road turns into a path that starts with a steep uphill of rocks and stone steps, then goes back to a dirt road that takes us to the small village of Monteforte (m 697 sl). At the fresh water trough we turn left onto a tarred road slightly downhill, before taking a dirt stone road to the left going up (called "Sentiero Del Grillo" N°036 Monteforte – Bosmenso) and after 10mins we will reach a crossroad.
We leave the road going to Bosmenso village; still going uphill we turn right into a lovely Chestnut woods and, after about 20mins, we will arrive at S.P. n°91 route Varzi-Castellaro di Cella. We turn left on to the tarred road and after roughly 2,5km we arrive at Castellaro (m 760 sl). At the crossroad  to Casanova Staffora, we turn right still on the tarred road, after 50m we go to our left for another 50m.  Now it becomes a dirt and stone trail. We walk to the first crossroad where we turn right and immediately we have the second crossroad, where we turn left. We go uphill through the woods until we come to a tank of the aqueduct; after a few turns of the trail, we will find a narrow and steep path that goes up through the woods of Beech trees.
After about 15mins, we will come to a crossroad where we turn right on the dirt road for 200m, we will see on our right a small basin of water. We continue on the path, straight up the hill untill we reach a dirt flat road. 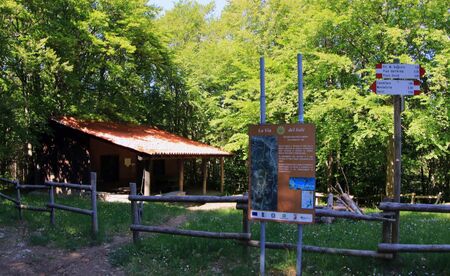 Going to the right for about 400m, we will come to a curve where we turn left and  go up, still with the Beech trees. The way is steep and takes us to an open field in the middle of beeches and firs trees. We meet up with a wide dirt road that, turning to our right, it will take us in about 30mins to Pian della Mora (m1380 sl). Here we find a camp with a picnic area, there is a crossroad that to the left takes to the village of Cegni (trail n°004). Keeping straight southward, we reach a grass summit and immediatly we find the Old Sea Route (Via del Mare - path n°105) which is an alternative trail from the town of Tortona that takes us to Portofino; for a very long way  it is the same as the Old Way of Salt.
We have now arrived at the ridge between the valleys of Curone and Staffora, and we continue through green fields, beech and larch trees. Passing by Monte Boglelio (m1492 sl) we reach Monte Bagnolo (m1550 sl) where there is another small camp. We continue along the ridge for about 15mins until we arrive at Colle della Seppa (m 1485 sl), where there is an important crossroad. The Salt trail goes along the ridge heading southwards, going to Monte Garave (m1547 sl) outflanking Monte Rotondo (m1568 sl), with a steep up-hill the trail arrives at Monte Chiappo (m 1701 sl): it is the highest point on the route.  On the top there is a statue of St. Joseph the Carpenter; in addition it is an excellent panoramic point giving us a 360° view of The Po Valley, The Alps and The Ligurian sea, it is also the meeting point of three regions: Piedmont, Lombardia and Emilia. On its summit, there is a  care-taken refuge with a chair-lift connected with Pian del Poggio hamlet (m 1320 sl). Continueing on the ridge, the route goes down quickly and in 30mins we arrive at the villages of Capanne di Cosola (m 1496 sl) or Capannette di Pej (m 1463  sl).
Share